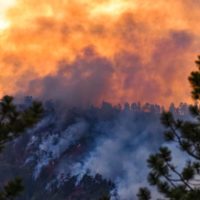 Law enforcement officials in northern Colorado ordered evacuations Tuesday after a wildfire broke out in Estes Park.The Kruger Rock Fire, which broke out around 7 a.m. Tuesday, grew to about 100 acres with zero containment as of early after noon.

The Larimer County Sheriff’s Office ordered mandatory evacuations for areas east and south of Highway 36, which was closed between Estes Park and Lyons to the south. Officials set up an evacuation center at the Estes Park Fairgrounds and an overnight shelter at the YMCA on Tunnel Road. The city of Longmont also closed the Button Rock Preserve, located southeast of Estes Park.

The blaze has not burned any structures, but it is near homes and businesses in downtown Estes Park. Sources from the sheriff’s office say the wildfire may have been started by an electrical issue; the cause was under investigation.